The Granite City Community Band fields two separate bands that support different areas of the community. Both bands welcome new members who are of high school age or older and want to participate. If you have questions about joining, please contact us at board@graniteband.com and we can answer questions or help you feel more comfortable. We are always excited about new members!

The mission of the Granite City Community Band shall be to foster and promote the concept of the adult community band. In implementing this purpose the organization’s goals shall be:

The concert band is a full wind ensemble with woodwinds, brass, percussion, and double bass. The concert band rehearses from Labor Day (September) in the fall until the final concert, normally the first week in May. The concert band does not normally rehearse during the summer, but is active year-round sharing their talent and bringing the sound of live concert band music to Granite City and surrounding communities. The band likes to encourage, promote, teach and perform the fine arts. The band performs throughout the Granite City area. All of these concerts are FREE, making an afternoon or evening of live music affordable and family-friendly. The band performs a wide-ranging repertoire, including marches, show tunes, popular songs, contemporary compositions and classical band literature.

Concert band rehearsals are on Thursday evenings from 7pm until 8:30pm. 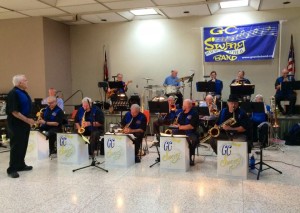 The Granite City Swing band is a swing ensemble that regularly plays dances for the community and other events. The swing band rehearses from Labor Day in the fall until the first week in May, immediately following the concert band rehearsal and year round once a month.  Within the band’s library are many charts from the “Golden Oldies” such as pieces by Glenn Miller, Tommy Dorsey, Duke Ellington, Woody Herman and many, many more. Also, the group plays charts written and/or arranged by some of our area’s finer arrangers and composers. The group usually consists of many of the members of the Granite City Community Band as well as other fine musicians from the Metro area. The group normally has sixteen to twenty musicians, which play at many functions and benefits across the St. Louis Metro Area.

GC Swing regularly plays contracted gigs for organizations in the Metro East area. If you are interested in hiring out the swing band for your event or dance, please contact the swing band manager at swingmanager@graniteband.com.

The Granite City Adult Community Band began with a desire to fill a void ~~ there was nowhere in Granite City to play concert band music after high school graduation. A meeting attended by Louis Meek, Joe Owens, Jack Johnson, and Billie Strauser in the summer of 1989 started the process. After many phone calls, newspaper notices and meetings, the first rehearsal was held on Wednesday, September 16, 1987, in the Granite City High School Band room.

Come to a rehearsal or contact board@graniteband.com if you have questions. New members of any skill level are always welcome!